House Taken Over is the culmination of a year-long project at BalinHouseProjects (BHP). BHP is an artist-run, not-for-profit space by Eduardo Padilha at his flat in Balin House, Tabard Gardens North Estate. Eduardo Padilha and Harold Offeh have been hosting a series of lunches in Eduardo’s flat and workshops at Tate Exchange to consider the home as a site for artistic practice, the point at which domestic and public worlds collide, and art as a social tool.

The book is edited by Jes Fernie, who was invited to be writer-in-residence at BHP, and includes an experimental text by Holly Corfield Carr; interviews with Martin Cordiano on his installation in Balin House, and Russian theatre director Ada Mukhina about living with art; and texts by Harold Offeh and Lorena Muñoz-Alonso. The book is designed by Sarah Boris.

The evening will include an installation of Martin Cordiano’s On Translation.

House Taken Over is available at White Chapel Gallery and Serpentine Gallery bookshops: 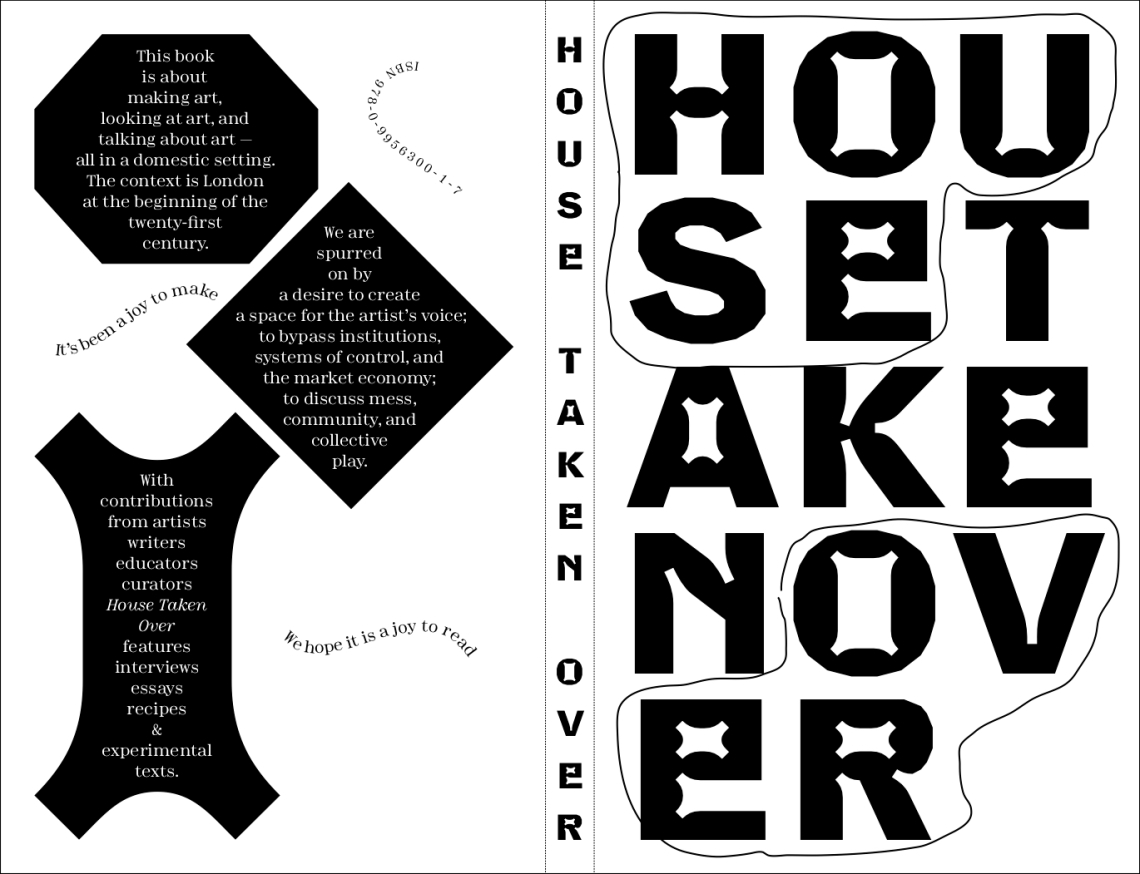 In her diary entry for 12 June 1969, the American artist Lee Lozano wrote:
Call, write or speak to people you might not otherwise see for the specific purpose of inviting them to your loft for a dialogue.
Note: The purpose of this piece is to have dialogues, not to make a piece.
This statement was part of a work called Dialogue Piece (1969), in which Lozano invited artists, gallery owners, and curators to her studio for a discussion about art and life. The idea was that there would be no games, no hierarchy, no egos, just the exchange of ideas. Perhaps the outcome wasn’t as productive as Lozano would have hoped, but the project was a moving response to an art world overly focused on objects and financial gain. Dialogue Piece is a fitting precedent for BalinHouseProjects, established by artist Eduardo Padilha in 2006 in his flat in south London to create a social environment in which to talk about and view art.
Over the last twelve years, a diverse range of installations, workshops, lunches, residencies and events have been held under the BalinHouseProjects moniker. This book focuses on House Taken Over, a project initiated in 2017 by Eduardo and artist and educator Harold Offeh, which considered a range of issues relating to the artist’s place in twenty-first century life, including hosting as an artistic strategy, the house as a civic space, artistic participation in community life, moving beyond institutions, and domestic space as an alternative to the white cube. The project comprised a series of new works made
by Argentinian artist Martin Cordiano for each of the four rooms in Eduardo’s flat; five lunches with artists, residents, curators, educators, and thinkers; and several workshops held at Tate Exchange.
This book consists of documentation of these elements of the programme, as well as a text by Lorena Muñoz-Alonso on the occupation of space and systems of measurement in Martin Cordiano’s work. Harold Offeh takes us through the House Taken Over workshop programme and highlights the urgent need to embrace collective play through learning programmes in order to create a more democratic space for art and art-making.
In the spirit of open-endedness and ongoing exploration, we decided to include a piece of experimental writing by Holly Corfield Carr written in response to the House Taken Over programme; an interview with a resident of Eduardo’s flat in Balin House, which considers the performative nature of living with art; a selection of recipes from the meals Eduardo cooked for his lunch guests, using ingredients such as pumpkins, quinces, and purple potatoes; and a rich and eclectic reading list constructed by participants of the programme. The aim is to create a book that the reader can dip in an out of, but can also use as a tool to think, host, and act.

It is an artist-run space, non-profit and self funded. Provides space for first solo exhibition in London, dialogue and platform for connection with other artist-run spaces and organizations. BHP has an emphasis on social exchange, interactivity, and public participation. It is organized by Eduardo Padilha View all posts by BalinHouseProjects